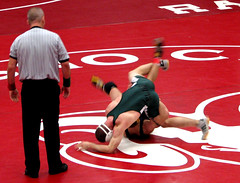 A man who is a two-time NCAA wrestling champion has been suspended from Penn State’s team because allegations of drunken driving. According to investigators, Ed Ruth, 23, had a blood-alcohol content was more than three times the legal limit when his vehicle struck a tree while he was trying to park it along the street on November 13th.

Spokesman for Penn State University, Pat Donghia confirmed that Ruth has been suspended from the team since November 19th as a result of the DUI charges against him.

Ruth will not be allowed to return to the University’s wrestling team lineup until December 15th or later.

Anytime there is a charge of DUI or driving under the influence, it can have a serious and often detrimental effect on the life of that person. The ability to afford to finish college, gain employment can be adversely affected by a drunken driving charge.

With over 20 years of experience, the Law Offices of Steven E. Kellis focuses on helping defendants in DUI lawsuits. He has worked on both sides of the courtroom working for the prosecution and has defended those who have been involved in DUI accidents. Steven E. Kellis knows the law and having him in your corner from the first moments of your arrest is your best plan of action for your DUI defense case.

If you or a loved one has been involved in a serious DUI accident of any kind, you can contact us 24 hours a day, 7 days a week by either calling the number or using the contact form located on our page. The initial consultation and legal analysis of your DUI case is free.