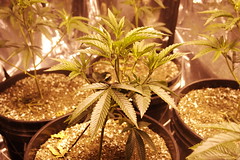 Did you know that you can get a DUI charge for substances other than alcohol? Illegal drugs and certain prescription drugs that impair driving can also get the cops to charge you with DUI. It’s much more difficult to defend against a DUI charge for a substance that’s not alcohol, since most police stations will perform a blood test to analyze what is in the suspect’s body.

One unlucky teenager got that surprise as soon as he got his license. A man in New Jersey had just gotten his license and managed to crash his car while high with a friend a few hours later. There were no injuries, but the boy did drift into oncoming traffic and hit the guard rail. He admitted to police that he had smoked 30 minutes earlier.

Under such circumstances, there’s little to do but to take the sentence. Admitting to the police that you have done illegal drugs before getting pulled over is an excellent way to get taken into the station for a blood test. We advise you not to do illegal drugs before getting behind the wheel, but if you have been partaking of alcohol you should know your rights. Read the articles on our website to learn more about your rights as a citizen and what you can do to defend against a DUI charge.