When someone is pulled over as a suspect by the police, both parties need to watch their guard. There are things either one could do to jeopardize the results of a case. The police undergo extensive training before going out on the street, but sometimes things can go really wrong very quickly. 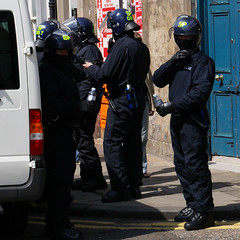 One incident caused an entire crowd of people to gather around and complain to the cops over what they did. There was a burglary in progress in Hunting Park in the middle of the afternoon. The police spotted a man on a bicycle that they thought was the suspect. When they tried to pull him over, he allegedly fled. Police pursued, striking him down with the front of their cruiser and hitting the porch of a home. Witnesses say the officer was trying to cut him off, but instead ran him down.

Two women rushed out to try and help, but the officers waved them back. Witnesses then said that one of the officers grabbed one of the women and roughed her up. The woman was pregnant, and that caused further tension with the crowd. One of the witnesses sent video to the police station. They also claimed that they further roughed up the suspect before putting him into the police vehicle. Internal affairs is currently investigating.

When the police act outside of the boundaries of the law, judges and lawyers will argue that their actions violated proper procedures. This can lead to cases getting thrown out entirely. When cops don’t follow the rules, everyone suffers.

If you feel like your rights were violated or excessive force was used in your arrest, seek legal help immediately. Kellis Law is ready to help you.