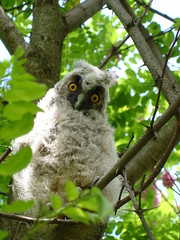 A DUI driver has been arrested after hiding 30 feet up a tree Friday on Interstate 290. Before law enforcement could apprehend him, he informed officers that he was in the tree because he was an owl. Troy A. Prockett, 37, of Hudson, MA had to be taken down by area firefighters in a bucket truck so that police could place him under arrest Prockett was arraigned Monday on a number of charges including his third offense for drunken driving.

According to a police reports about the incident, State Trooper Michael J. McCammon was driving on I-290 west at about 7:00 p.m. when he witnessed a white Nissan Maxima spinning out of control between the first two travel lanes. Trooper McCammon reported that after the Maxima hit a snowbank near the breakdown lane, it first came to a stop between the first and second lanes of the roadway causing other motorists to brake suddenly in an effort to avoid a collision.

The Maxima then continued forward at about 20 mph for about three-quarters of a mile in the breakdown lane, and did not stop even when the Trooper’s cruiser was directly behind it with the lights on. When the driver did finally stop his vehicle, he got out and jumped over a guard rail along the road into an embankment and into a wooded area.

A cursory search inside of the vehicle revealed Prockett’s wallet inside, which the officer stated smelled distinctly of alcohol. Reports indicate that police also had received a call from an area gas station that said they witnessed the same vehicle being driven by a drunken man and that a child was also inside.

K9 Officers called to the scene were able to track the suspect. After an hour, Prockett was found hiding in a tree. The report of a child in the vehicle turned out to be a false alarm and was safe at home at the time of the incident.

Prockett has been charged with a third offense of drunken driving, failure to stop for police, resisting arrest, leaving the scene of property damage and disturbing the peace. He was also ticketed for a marked lanes violation. He refused a Brethalyzer test. Since he refused the Breathalyzer, his license has been automatically suspended for a period of five years if the court finds him guilty.

If you or someone you love is facing a DUI charge, especially if it is a second or third offense, you will need the counsel of an attorney who knows the law. Steven E. Kellis has more than 20 years of experience in DUI cases. Mr. Kellis has been on both sides of DUI cases and he can help you. When you call the Law Offices of Steven E. Kellis, you may call us or fill out our contact form and our law offices will contact you. If you have any questions or would like to schedule a legal evaluation, we are here for you 24 hours a day, 7 days a week. A review of your case and legal analysis by Mr. Kellis is free and without obligation.