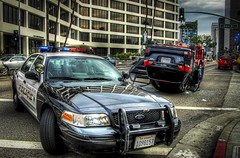 An accident only lasts a few seconds, but it can change lives forever. Just one instance of getting behind the wheel when intoxicated is all it takes. Everyone makes mistakes, and there is no driver who has never gotten into an accident. This reason, along with many others, is why the defendant in a DUI case needs the best defense possible. There is no such thing as a hopeless case when you have the right attorney at your side.

A young driver is being charged with DUI after he crashed into Philadelphia police vehicles at high speed while traveling the wrong way down the street. An officer was sent to the hospital as a result.

The driver was in a minivan, coming down Cumberland Street very quickly, according to a police captain on the scene. The minivan hit a parked car, and then bounced off that into the officer’s car, which then struck several other vehicles. The van was only stopped after it ran straight into an unoccupied police cruiser.

The van driver and the officer that was injured were both taken to a hospital and both are expected to make a full recovery. According to the police, the driver of the van seemed to be under the influence of an intoxicating substance and narcotics were found in his vehicle.

Fortunately, no one else was injured in the incident. It is yet unclear why the driver was going the wrong way down the street in the first place.

Some cases may seem open and shut with no good resolution for the defendant, but that is rarely the case. Steven E. Kellis has been litigating DUI cases for decades and knows all the ins and outs of DUI trials. If you’ve been charged, call him for a free consultation and find some hope.