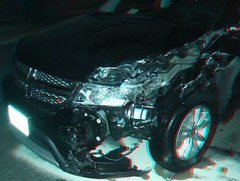 We often times read news articles about fatal car crashes, where the driver has consumed   way more than his fair share or alcoholic beverages. This continues to be one of the main reasons for road fatalities daily.

Marceo Fulmore was heavily intoxicated while he drove around the areas of 17th and East Carson Street at 2:20am on a crashing spree, hitting two parking signs, two tress a fence, a telephone pole a fire hydrant seven cars and ran over the foot of 26 year old man  before coming to a stop. Luckily, no lives were lost or anyone seriously hurt. Bystanders were enraged by this display of careless behavior and decided to take matters into their own hands, the police intervened before things got out of hand. Fulmore, 23 was placed in the Allegheny County Jail, after being released from the hospital, with multiple charges ranging from aggravated assault, DUI, aggravated assault by a vehicle and aggravated assault by DUI.

It is painstakingly truthful that 80% of these road fatalities are caused by young adults.  Information from the State Justice department reveals that in Pennsylvania alone, 53,319 persons were arrested under DUI charges for the year 2013. All DUI charges have harsh sentencing penalties and stain your criminal record leaving a long lasting negative impact. It is recommended that one contacts a DUI lawyer as soon as possible after the accident occurs.

Our seasoned lawyers at Steven E. Kellis will work to build a strong defense in order to lessen or eliminate your charges and find the best suited resolution for you. DUI in Pennsylvania is no joke, laws have been passed to give enhanced and harsh sentences to those found in the wrong. We understand that all human are without fault, let us help you get back on the right path to better life. Contact us for your free consultation today