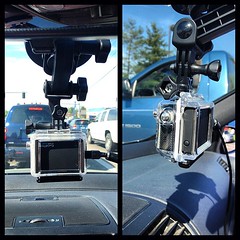 Sometimes, cameras in police cars can be a good thing.  They provide solid evidence as to what really took place instead of relying on memory and personal testimony as to what happened.

Assemblyman Paul Moriarty is making it a personal crusade to make sure cameras are in all cruisers.  The video from a dash cam was the difference in conviction and a dropped charge in his DUI arrest a couple of years ago.  Right now, the legislation is only one signature away from becoming law in New Jersey.

In July of 2012, Moriarty refused a blood alcohol test when pulled over because he had not been drinking.  He didn’t submit to the test because he was afraid that if an officer pulled him over without cause, the officer may manipulate the results of the BAC.

Moriarty, a former Washington Township mayor, obtained the dash cam footage from the squad car as evidence in his defense.  The video proved that he was not driving erratically and the arresting officer is now facing trial on 14 charges of falsifying a police report and official misconduct.  Moriarty was lucky.  He happened to be pulled over by a police vehicle that had a video camera on the dash.  There are 41 other police cars in the area that do not have cameras in their vehicles.

Cameras in the cruisers are extremely important in defending against a DUI case.  Sometimes evidence proving the stop was not legal is captured in black and white.  Without a tape, it is the officer’s word against the defendants.

Visual evidence goes both ways.  It can also prove an officer is justified in an arrest and save them time from defending against frivolous law suits and answering to internal affair investigators.

The bill would also increase fines against convicted drunk drivers by $25.  This money would go to pay for the cameras.  The Office of Legislative Services believes that approximately $577,000 will be raised annually.  That will allow 90 squad cars to be equipped with cameras.

A DUI conviction can permanently affect your life.  Representation upon arrest is a first step in developing a good defense against the charges.   Steven Kellis has vast experience and knowledge and will aggressively defend you on alcohol related charges.  Contact him today for a free consultation with an experienced PA DUI lawyer.