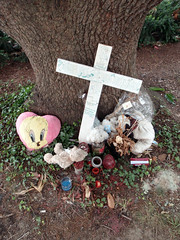 It is a sad fact of life that tragedies often occur out of nowhere. One moment causes tragedy that lasts a lifetime. At times such as these, it is common to look for someone to blame and those accused of driving under the influence are the first targeted, sometimes even when they were not even behind the wheel when the tragedy happened.

A Stanton Heights man was charged with DUI after the death of his 12-year-old daughter, when his SUV ran her over. She had just returned from her first date, a movie with a young man who lived nearby. Her parents were dropping the boy off at his house when the tragedy happened.

Police accounts say the girl had gotten out of the family’s SUV so she could take some pictures to commemorate her first date. Her father got out of the SUV to take the pictures when the car began to roll backward. The girl was hit and dragged down the hill before the SUV ran her over. Though her mother and brother were still inside the SUV, they were unable to stop it. The girl’s mother’s attempt at CPR failed to revive her.

According to police, the father was visibly intoxicated when police arrived, but he refused to be tested. He was arrested and charged with DUI. Police are investigating the details on what happened to the car’s brakes.

Tragedy is difficult enough to overcome, but when charges of DUI are added, it can make the difficulty seem impossible. Not only must the emotional pain be dealt with, but the injury done by the charges can be fatal to the defendant’s reputation and employment prospects.

Stephen E. Kellis understands the long-reaching effects these charges can have and has dedicated his life to help. Call the experienced Pennsylvania DUI lawyers at Kellis Law for a free consultation and we will do everything in our power to give you the defense you need and deserve.