Everyone deserves a fair trial, whatever the charges. This includes those who have been arrested for DUI, whether the first time or not. Unfortunately, it can be difficult to achieve that fairness because of the stigma attached to drinking and driving. Certainly, driving under the influence is a mistake and wrong, but that shouldn’t necessarily mean automatic conviction, a long jail sentence, crippling fines, and a ruined reputation. The help of a skilled DUI lawyer can make all the difference.

Delaware police report a man who has been arrested for a DUI offense — his seventh.

The 42-year-old man, a resident of Bear, Delaware, was arrested after causing a single vehicle crash on Capital Trail in Newark.

Police investigated the accident and charged the man with his seventh DUI, driving with a suspended license, and careless driving.

Reports indicate the suspect has been taken to Howard R. Young Correctional Center. His bail has been set over $20,000.… Read More

A civil suit names David Stahl, as well as the drinking establishments he visited prior to the strangulation death of his wife, as defendants. The family of his deceased wife hold that due to Stahl’s well known reputation as a drunk and an abusive drunk; that serving him while he was intoxicated was a clear example of negligence. In addition to Stahl, the Kow Boy Lounge and the Whitney Social Club are also named in the civil suit which is just beginning even as the jury selection for criminal case against Stahl continues.

While every lapse in judgment involving alcohol isn’t as serious as the Stahl case, even a DUI can have long lasting and unforeseen consequences. Inevitably our actions will always have consequences and we often find that we need help sorting out those consequences.

The Law Offices of Steven Kellis are experts in DUI Law. Steven Kellis brings twenty plus years of jury trial expertise to bear on your behalf.… Read More 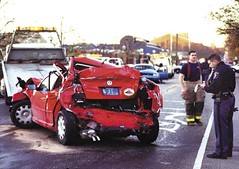 Early Wednesday morning, residents of North Franklin Township were woken up by what sounded like a burst of  thunder.

The actual source of the noise was a vehicle, out of control, slamming into and hitting five parked cars. One of the vehicles struck was a van that was dislodged from its parking spot and sent rolling towards the front of a nearby home. According to the homes’ owner it was fortunate that the van stopped just short of the front of the home, as the occupants’ children have their rooms against the front of the house.

Firefighters were forced to cut the driver of the vehicle free as he had become pinned when the car flipped and skidded, striking the parked vehicles. Blood tests have been ordered and if, as police suspect, the driver was intoxicated at the time of the accident; charges will be filed accordingly.

When accidents happen that is when the services of professionals, like Steven Kellis, are needed.… Read More

A Bear Delaware man was arrested early morning June 4h for what police are reporting as his seventh DUI offense. Ronald Hazzard was involved in a minor car accident at around 1:30 a.m. which police investigated.

As a result of this investigation, Bear police arrested Mr. Hazzard and charged him with driving under the influence of alcohol, driving with a suspended license and careless driving. Mr. Hazzard is currently being held at the Howard R. Young Correctional Center as he has not as of yet managed to come up with the $20,000 bail that has been levied against him.

When these incidents happen that is when the services of professionals, like those of attorney Steven E. Kellis are needed.  After over 20 years of experience, Mr. Kellis has a policy of aggressive representation for his clients, a focus on high quality, state wide service and excellence in the advice he provides.  … Read More

Just after midnight on Monday, a motorcycle driven by a sixty-year old rider slammed into two pedestrians on 58th Street. The twenty-nine year old woman and thirty-two-year old man were transported to the Hospital at the University of Pennsylvania.

The two injured people were crossing 58th Street and Florence Avenue when they were hit, suffering non-life threatening injuries in the crash. The rider also suffered minor injuries. He has been arrested for suspicion of driving under the influence of alcohol.

The Law Offices of Steven Kellis are experts in DUI Law. With years of experience as both an Assistant District Attorney as well as a DUI focused defense attorney, Steven Kellis brings twenty plus years of jury trial expertise to bear on your behalf. With his extensive background in Pennsylvania law and the inner workings of the District Attorney’s Office, he knows how to find the mistakes and errors made by law enforcement that can make all the difference between conviction and acquittal.… Read More