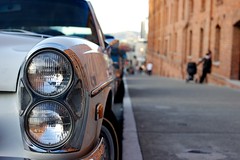 Everyone, no matter who they are, deserves a fair defense when accused of a criminal offense, including those suspected of DUI-related charges. Often, the stigma that goes with a drunken driving charge makes it very difficult to see that the defense gets an equal hearing with the prosecution, but a good defense attorney can make sure the defendant’s story is told, preserving the fundamental rights of his or her client.

A man driving a white Mercedes crashed into two cars on both sides of the street, then tried to flee the scene of the accident in another vehicle, police say.

Cheltenham Township Police said the Mercedes sped past a red light, hit a car, and then swerved to it a second car on the other side of the street, around 2 in the morning.

The driver then got out of the Mercedes and got into another vehicle that appeared to be waiting for him, according to investigators.

Police managed to catch him just a few blocks away and he was arrested. The authorities are waiting for toxicology results to return before formally charging the man.

If you’ve been arrested for a DUI offense, your first step should be to call for legal defense. That call should be to the office of Steven Kellis. With experience in both prosecution and defense, we know both sides of the law and how to use that knowledge to your advantage. Contact us today.