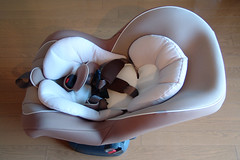 No two DUI cases are alike. Everyone has a different story, whether guilty or not guilty, and it takes an attorney who understands that uniqueness to truly make a difference. Negotiation for settlement or an actual trial is very much like explaining both sides of a story so everyone gets a fair hearing — especially the accused — because it’s impossible for anyone but the accused to truly know what happened in any given situation.

A woman in Moon Township was pulled over and arrested for DUI. Her two-year-old daughter was in the car at the time. According to police, this was not the first time she was drinking and driving with her child in the car. The difference this time was an incident of road rage before she was pulled over.

The 40-year-old mother was driving a white Toyota SUV, according to the Moon Township chief of police, and causing more than her share of trouble. Police reports say frantic young woman called to say another woman was behind her, chasing her vehicle, and even ramming into her several times.

The victim was able to describe the suspect, what her vehicle looked like, and what clothing she was wearing. Police began their search and quickly found the suspect. When they did, they also found the little girl in the back, in a child safety seat. The officer who questioned her said he smelled a strong odor of an intoxicating beverage on her breath.

An officer gave the woman a number of sobriety tests, and she failed all of them.

At first, she told police she had not been drinking, and then she admitted to drinking two bottles of whiskey at home. Police found an additional bottle of alcohol in her back pocket. She also told police she had taken Percocet the night before. No one was hurt, but the woman faces charges including reckless driving, endangering the welfare of a child, and driving under the influence.

Police say the suspect also has a pending DUI. Her child was in the car during that incident as well.

The mother was released to a family member, while the child’s father took custody of the 2-year-old.

No DUI case is as simple as it might look to outsiders. If you’re involved with DUI charges, you need someone who understands the complexity of your particular situation and how the law applies. Contact Steven E. Kellis today. We specialize in Pennsylvania DUI law and know how to tailor a case for your specific needs.