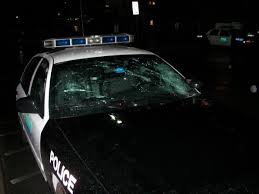 Early Saturday morning an officer in Old City Philadelphia was sitting in his cruiser when the vehicle was struck by an SUV. The impact forced the cruiser up over the curb and into a lamp post. The officer suffered non-life threatening injuries and was transported to Jefferson Hospital where he was admitted for treatment.

The driver of the white SUV was arrested for driving under the influence after blowing nearly twice the legal limit when a breathalyzer was administered. The officer is listed as being in stable condition. The driver of the SUV was uninjured.

While every lapse in judgment involving alcohol isn’t as series as this case, even a DUI can have long lasting and unforeseen consequences. The Law Offices of Steven Kellis are experts in DUI Law. Steven Kellis brings twenty plus years of jury trial expertise to bare on your behalf. With his extensive background in Pennsylvania law and the inner workings of the District Attorney’s Office, he knows how to find the mistakes and errors made by law enforcement that make all the difference between conviction and acquittal. If you have been arrested for DUI, contact us online or by phone for your consultation.