Home» Blog» In The News» Vigil Held for Police Officer 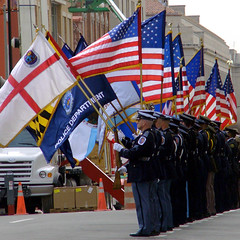 Society’s belief is that teachers are role models and are above human error. These persons are sought as second parents for our children and teens for proper guidance in the absence of primary caregivers. This is not always the case, as high school teacher Michael Ettz is a living testament.

It is alleged that Ettz got behind the wheel of his SUV while heavily inebriated and slammed the vehicle into a police patrol car, where the officer had pulled over to assist a colleague. The officer, known as Daniel Breslin, is a member of the Bergen County Police force. The incident occurred on Route 46, which left Breslin with many broken bones and in an induced coma. Many poured out in hundreds to the Holy Trinity Church in Hackensack in an effort to show their support and well wishes for the 39 year old husband and father of two, who is being kept alive on life support. Doctors surmise that Breslin has a fighting chance to come out of the coma alive.

Financial support for Breslin has been funded by the Bergen police department, with members exclaiming that he was too good a guy and he did not deserve such a fate. Following Ettz’s arrest, he has been suspended with pay by a unanimous vote by The Lodi Board of Education. However, Lodi Schools’ Superintendent Frank Quatrone recommends that his pay benefits be suspended if he is indicted by a grand jury.

A fun night out, with a few drinks can end disastrously. If you find yourself in need of proper legal representation, do not hesitate to reach out to us. Steven E Kellis has dealt with many cases regarding DUI and will no doubt be of great help in your arrest. Contact our round the clock office to have your free case evaluation done