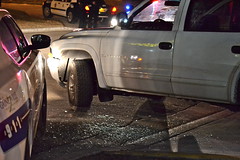 o one is above the law, especially when it comes to DUI. Driving while drunk is one of those accusations that can ruin reputations and end careers if they are not handled with the utmost care. As much as any other charges, DUI requires a skilled legal hand to make sure the accused is protected and that a mistake, whether made by police or by the one being charged, does not repercussions that could last decades.

A Pittsburgh police officer, 30, faces DUI charges including two counts of driving under the influence and one count of careless driving.

Police reports say officers were called to South Main Street in the West End just after 3 a.m. on February 3rd to look into a two-car collision. The driver of the struck car complained of a headache and was later found to have a concussion, according to police.

Reports also say the officer who allegedly caused the crash smelled strongly of alcohol and had ‘”bloodshot glassy eyes”. He claimed to have lost control of his car on the on-ramp. When asked to perform field sobriety tests, he complied and failed. Breath tests registered his blood alcohol content at 0.195 and 0.199, more than twice the legal limit for operating a vehicle.

Police spokespersons say the officer remains on the force, but have been relegated to support services. His attorney remained unavailable for comment.

No matter what your occupation or walk in life, if you’ve been accused of DUI, you’re going to need the best representation you can find. You’ll find it with Steven E. Kellis. Call our offices for a free consultation and we’ll get you the help you need to protect your rights and defend your reputation and your future.