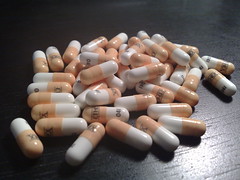 Dr. Richard Ruth was found guilty by a jury in a Montgomery County Court of all 25 counts filed against him after just 70 minutes of deliberation.

First Assistant District Attorney Kevin Steele called to the witness stand a number of Ruth’s former patients. Many testified that it was relatively easy to get Ruth to write prescriptions for the highly addictive painkiller, oxycodone and other medications that were considered controlled substances.

Richard Ruth faces a sentence of up to 60 years in prison, while his son, Michael Ruth is facing between 25 to 50 years if convicted.

Prescription drugs are responsible for a significant percentage of DUI arrests. Pain killers like the ones that were sold in the news article can affect driving adversely. However, these drugs are legal with a prescription. Unlike an illegal drug, the prosecution has to prove that you had enough in your system to affect your driving negatively. This is harder than it may first appear.

Mr. Kellis has a solid reputation as an attorney with over 21 years of successfully representing clients. With the Law Offices of Steven E. Kellis, you can be assured of the best representation possible to defend you.

If you have been accused of a serious crime, you need the expertise of Steven. E. Kellis. He knows that even though the police and other authorities have done considerable research for their case against you, you have rights. Kellis Law is here to defend you and those rights. Mr. Kellis will be with you every step of the way. Give us a call for a confidential appointment and free initial legal analysis.