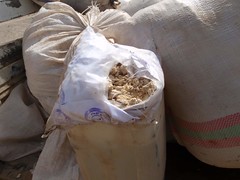 Altoona Police say that two men that just returned from Baltimore to Altoona with raw heroin have been arrested on felony drug charges.

According to police reports, at approximately 3:22 p.m., officers from Altoona police and members of the Blair County Drug Task Force placed Devon Nakia Rochester, 38, under arrest. Rochester was reported to having had more than a dozen capsules containing heroin that he had hidden in his underwear.

Rochester had been riding as a passenger in a gold 1994 Honda driven by David Robenholt, 23, of Tyrone. The men had just returned from a road trip to Baltimore, where they allegedly they bought the drugs for approximately $1000.

After the purchase, the purchased amount of heroin, which was approximately 10 grams in weight, it would then have made up into an estimated 250 bags that carries an estimated value on the street of $5,000.

The men were detained without incident and a warrant was obtained to search Robenholt’s vehicle. During questioning, Robenholt allegedly informed investigators that he had made at least one previous trip to Maryland in order to purchase heroin, Robenholt explained that he is currently unemployed and was selling the drugs in order to pay his bills.  Rochester has had past arrests including assault, possession of drugs and DUI.

The United States and Pennsylvania Constitutions, however, require law enforcement officers to conduct “reasonable” searches and seizures. Evidence obtained in violation of the Constitution must be suppressed. Consequently, the defense should always consider testing the reasonableness of the search through a motion to suppress this evidence.

If you are potentially facing a conviction involving a narcotics charge, give the Law offices of Steven E. Kellis a call. Mr. Kellis has spent over 20 years practicing law as both a prosecuting attorney and on the side of the defense. Steven Kellis can help you and your case as well. It is possible to reduce or even avoid harsh prison sentences, excessive fines, and other penalties in connection with your case. With experience in both state and federal courts, the Law Offices of Steven E. Kellis are here for you 24 hours a day, 7 days a week.