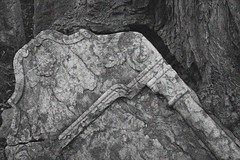 A 26-year-old Chicago man, who is still currently hospitalized, has been charged early Friday morning in connection with the Christmas Eve crash that killed his own daughter. Jeffery Smith, of the 5600 block of South Wolcott Avenue, faces charges of aggravated DUI leading to an accident or death, in addition to citations for negligent driving, failure to reduce speed and a child restraint violation.

First responders found Smith’s Chevy Impala on its side against a tree on the 1000 block of West Garfield Boulevard late Tuesday night. It took more than 40 minutes to extricate Smith from the vehicle, authorities said, and it wasn’t until they were inside that they noticed the girl was also pinned inside.

Investigators stated in court that at the time of the accident, Smith had a Blood Alcohol Concentration (BAC) of .137, well over the legal limit of .08.  Prosecutors also said that Smith also had cannabis in his system before the crash that killed Smith’s 8 year old daughter.

Smith, who has no prior criminal history, is being held on $350,000 bond on the condition that he not operate a motor vehicle. Smith’s daughter, Lauren, age 8, died as a result of injuries she sustained in the crash.

The story is an obvious tragedy, and one with a cost that this man will be paying for the rest of his life, regardless if the DUI charge sticks or not. Anyone who has a DUI conviction on their record can pose a serious detriment to their lives. A person convicted of DUI can be fired from their job and prevented from future job placements, refused driver’s insurance, as well as heavy fines and time behind bars. This can be a painful place to be in for both the person charged with DUI and their whole family.

If you or a loved one has been arrested on the charge of DUI, give a call to the Law Offices of Steven E. Kellis immediately! Our staff will schedule a confidential initial consultation with an experienced Pennsylvania aggravated DUI lawyer.