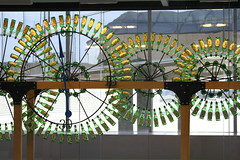 A public service announcement for Bud Light during the game on Super Bowl Sunday will feature one of the most dominant players in all of pro-football history. He is also a convicted drunk driver.

All-time National Football League sack leader, Bruce Smith, who played a combined 19 seasons with the Buffalo Bills and Washington Redskins before retiring in 2003,: “I disappointed myself and those close to me.”

Smith urges viewers: “Please, learn from my story and make sure a safe ride home is also part of your game plan.”

This is Anheuser-Busch’s first PSA message which features a celebrity that has been convicted of drunken driving.

Smith was arrested in 2009 near his Virginia Beach home after being out with business associates and consuming “several” glasses of wine. Today, whenever Smith goes out with friends, he has a designated driver who is a former Virginia state trooper.

Smith people get his message. “To pull a scab off an old wound is not something anyone likes to do,” he says. “If this helps one person make a wise decision, it’s worth it.”

The best way to avoid a DUI arrest is to not drink and drive. For those with a DUI conviction on their record, it can cause serious problems both for the person convicted and their families. Anyone with a DUI conviction could potentially be fired from their job, or prevented from future job placements. If you are convicted of DUI, you may face the real possibility of being refused driver’s insurance, in addition to heavy fines and time behind bars.

If you or a loved one has been arrested on the charge of DUI, give a call to the Law Offices of Steven E. Kellis immediately! Our staff will schedule a confidential initial consultation withan experienced PA DUI lawyer that is both free and without obligation to you. Steven E. Kellis specializes in DUI cases and with over 21 years of experience, Mr. Kellis knows the law inside and out. He has successfully represented those who are charged with DUI offenses and he can do the same for you.